Day one in Calicut: Talai, Vinayaka and the Good Day

After a wonderful stay and work in Thrissur, My stay in Calicut was pleasant and fruitful. I reached Malaparamba Junction, the place suggested by Abhishek Shankar on Saturday (29 November 2014) afternoon and gave him a call on his cell phone. He was going to take care of my lodging at his office, which earlier used to be his house. Just after a few minutes of unbinding my luggage and settling down, Abhishek, a professional Architect with vivid social concern, handed over a well designed map/chart of the city to me. Explaining the map he told me about all the important places, landmarks and institutions. 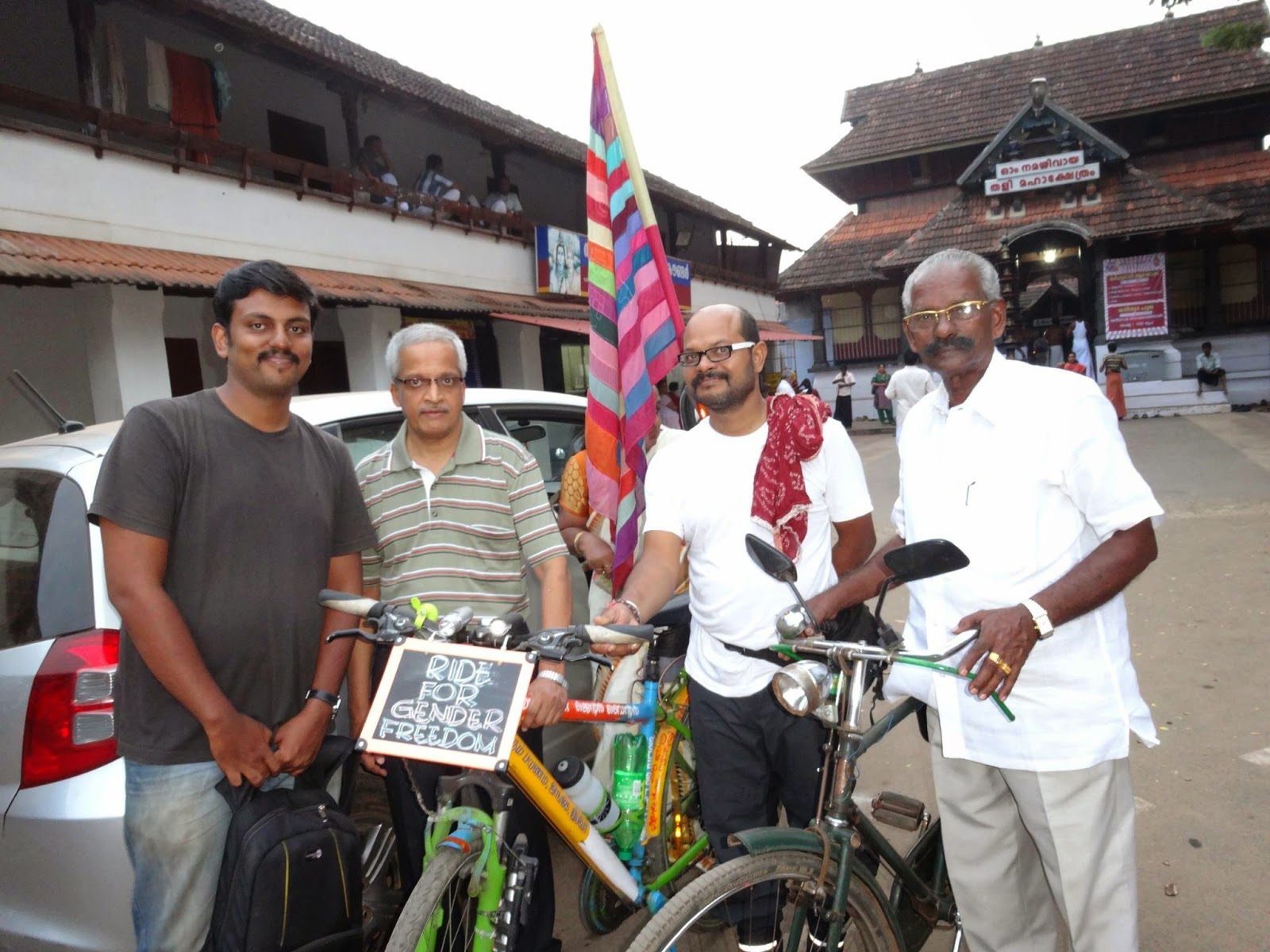 In the evening he escorted me with his Enfield mobike to the city. First we stopped at Calicut Press Club. There we met the Secretary Mr. A. V. Sherine. Sherine is a nice human being. He heard about my ride and its objective. Appreciated and suggested to see an article on Acid Attacks written by the Social Welfare Minister Mr. Muneer in the recent issue of Matribhumi, a malyalam weekly. He also suggested to meet Mr. Muneer as he could understand the mission of the ride and might support. Next he offered a press conference in the press club on Monday. That was a kind of big moral support.

After that Abhishek took me to Talai area (Daryaganj of Delhi). There is huge pond in the locality. That might be one reason for naming the area Talai. Mr. Kris Sreekandath, now my very dear Kris Bhai and Sebastian uncle waiting there for us. Kris Bhai, originally from Kochi has spent most of his time in Oxford and now settled in Calicut for the last few years. Sebastian Uncle, a cyclist for the last 62 years is a very nice and enthusiastic human being. Later we all went to nearby Vinayaka restaurant, there Abhishek and Kris Bhai interviewed me with nice coffee. Kris bhai always keeps Sony camera in his pocket and never leave any chance to click. He has taken some photographs in front of a very old temple.

On the way to Vinayaka restaurant we met with a cycle shop owner, Kris bhai introduced me to him and said that he met to Abhishek only because of him. This wonderful human being offered me to repair my cycle if required.

Later I followed Abhishek and went to the office of Social Welfare Minister of Kerela Mr. Muneer. But by the time we reached there, he had left for some other work.

Once again I followed Abhishek’s Enfield till a whole sale market. From there Abhishek left for his home and I decided to take a round of the city. But before that I got some batteries for my cycle lights and a tooth paste. K. P. NAMBOODIRI'S an Ayurvadic for the first time. The shopkeeper gifted me a packet of Good day, my all time favourite biscuit. There met many shopkeepers and salespersons encircled the GENDER BENDER and started asking about the Ride. Why the ride? From where I started? My native place? (these were the questions. In fact, these are the questions, I usually reply. Everyday at least 50 times! I Always enjoy answering except when someone stops in the sun and started asking questions one after other or a mo bike passerby starts asking during the ride only.)

After that, I started for Malaparamba, my local place of stay. On the way to I had my dinner in SANGAMAM hotel. During my Calicut stay I had my many meals in Sangamam. Now the hotel owner and staff are my good friends. Every night I used to take two bottles of boiled water from Sangamam.

This was the end of the first day in Calicut. By the time I unfolded my mat, it was 1.00 hours. But I could sleep only after 3.30 hours.

Posted by Rakesh Kumar Singh at 6:06 AM

Rakesh Kumar Singh
Born in Tariyani, Chhapra, in Bihar, Rakesh Kumar Singh has mostly been a media-person for the most part of his life. He has spent about 10 years in Delhi working with the 'Sarai' programme of the Centre for Studies of Developing Societies, Delhi as a media researcher, studying the media market in Delhi and edited a Reader-series called Medianagar. He also spent time as a corporate communication expert with a few corporate firms and freelanced for several magazines and news papers. His first book Bam Sankar Tan Ganes is discussed as a valuable documentation of the contemporary history of rural Bihar. At present, he is wandering to complete his next book Beyond Nagas, apart from playing with the brush and colours. He draws his ideals from Kartulain Haidar's Kalandar and strength from Yash Malviya's poetry: Samay ki maar Sah lena nahin rukna mere saathi. A country free of gender discrimination is his final dream. And there haven't been more than three interests that move his life- Wandering, tripping and photography.